The benchmark model in Heaton and Lucas (1996) is a good starting point to demonstrate the capability of the current framework in dealing with endogenous state variables with implicit law of motions. The model encompasses many ingredients that appear in recent macroeconomic studies, such as incomplete markets, portfolio choices, occasionally binding constraint, non-stationary shock process, and asset pricing with non-trivial market-clearing conditions. We show how the model can be solved with wealth share or consumption share as the endogenous state, which are the two prominent approaches in the literature and naturally fit in our toolbox framework.

This is an incomplete-markets model with two representative agents \(i\in\mathcal{I}=\{1,2\}\) who trade in equity shares and bonds. The aggregate state \(z\in\boldsymbol{Z}\), which consists of capital income share, agents’ income share, and aggregate endowment growth, follows a first-order Markov process. \(p_{t}^{s}(z^t)\) and \(p_{t}^{b}(z^t)\) denote share price and bond price at time \(t\) and in shock history \(z^t=\{z_0,z_1,\dots,z_t\}\). To simplify the notations, we omit the explicit dependence on shock history.

In equilibrium, prices are determined such that markets clear in each shock history:

as an endogenous state variable. In equilibrium, the market clearing conditions imply that \(\omega^1_t + \omega^2_t = 1\).

where \(\hat{\mu}^{i,s}_t\) and \(\mu^{i,b}_t\) are the Lagrangian multipliers on agent i’s no short sale constraint and borrowing constraint, respectively. The multipliers and portfolio choices satisfy the complementary-slackness conditions:

We omit the explicit dependence on state \((z,\omega)\) except the first variable, and highlight that the the endogenous state variable \(\omega'\) features law of motions that are implicitly characterized by equations which depend on future exogenous state variables \(z'\). It should be clear at this moment that the key feature of our framework that enables to cast the equilibrium system as a single equation system, despite the non-trivial state-transition functions, is to include the state variable \(\omega'(z')\) for each realization of \(z'\) as unknowns.

The system can be implemented by the following HL1996.gmod code

As can be seen, the implicit law of motion for the endogenous state \(\omega'\) is captured by the consistency equation

which says that the future wealth share \(\omega'\) should be consistent with the current choices of stock and bond holdings, the future stock price—which is itself a function of \(\omega'\), and the realization of future exogenous states, state by state. Notice that unknowns \(\omega'\) are the inputs in interpolating the last-iteration policy functions to forecast future consumption and stock price, which are required to formulate the recursive system, in

Accordingly, \(\omega'\) is declared to be a vector of unknowns in

Notice the prime operator in w1n’, which is the syntax to specify the transition’s dependence on the realization of future exogenous states (recall, w1n is a vector solved from the policy iteration as one of the var_policy).

Now we discuss several tricks that facilitate casting the recursive system to the toolbox, which are commonly used for this class of models.

Since the original problem’s borrowing constraint is proportional to the aggregate endowment, we can use a transformation to simplify the constraint

Some built-in functions of the toolbox are used in this example.

GNDSGE_INTERP_VEC is a built-in function that evaluates function approximations for policy and state transition functions defined in var_interp once for all. The results are returned according to the order of variables defined in var_interp. The prime operator following GNDSGE_INTERP_VEC indicates that the approximation is done for each realization of the exogenous states. Accordingly, the returned values are vectors (of length 8 in the current example) corresponding to each realization of the future exogenous states. This step can be replaced by

although at a lower speed since GNDSGE_INTERP_VEC evaluates function approximations with vectorization. (This is particular relevant when using the adaptive sparse grid method as the coefficients are stored in a table with each entry referring to the coefficients across all vector dimensions. Therefore, using GNDSGE_INTERP_VEC instead of individual evaluations not only enables vectorization but also allows searching the table only once). GNDSGE_INTERP_VEC can also skip certain variables in var_interp when some of them are not necessary, and can be used without the prime operator but explicitly specifying the exogenous state that the approximation should be evaluated. This is relevant when the expectation can be calculated before evaluating the equation system, so the evaluation is conditional on the current state. See example Guvenen (2009) for an example.

After the gmod file is parsed and compiled by the online compiler, first call the iter file in MATLAB, which produces the following results

We can inspect the policy functions (e.g., for the equity premium declared as var_aux in Line 41 and defined in Line 70): 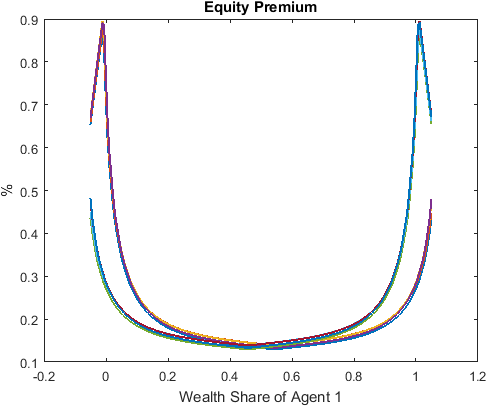 The policy functions demonstrate the non-linear and non-monotone properties of the model. These non-linear regions appear with positive probability in the model’s ergodic set as shown below.

We can simulate the model using the converged policy and state transition functions contained in IterRslt:

And inspect the simulation results:

The spikes in the ergodic distribution of wealth share at the two ends imply that the constraints are occasionally binding.

Evaluate the Accuracy of Solutions¶

And we are to evaluate these errors starting from a simulated ergodic set of states. Due to symmetry, we focus on Agent 1 only. This can be done by simulating, starting from the ergodic set, for one period forward, and evaluating these errors according to the equations defined above using the simulated paths. In particular, to calculate the expectation of the objects in the equations along the simulated path, we should use the exact transition path for integration to eliminate sampling errors.

The MATLAB code that implements the above procedure is listed below (or download eval_euler_errors.m), which should be self-explanatory with the documentation contained.

The model can be solved using consumption share as the endogenous state. In this case, the budget constraint

where \(\hat{c}^2\) (and \((\hat{c}^2)'\)) can be trivially inferred from the goods market clearing condition \(\hat{c}^1+\hat{c}^2=1 +\hat{d}\), and, hence does not need to be defined as extra unknowns when evaluating the equation system. The “Financial Wealth” is a function of future endogenous states, and can be part of the implicit state transition functions.

The gmod file that implements the recursive system is (HL1996_consumption_share.gmod)

As shown, compared to the one with wealth share as the endogenous state, the new implementation is made possible by declaring \({\hat{c}_1}'(z')\) to be c1n in

by defining the “Financial Wealth” by flow as var_interp

by defining the consistency equations for \(\hat{c}_1'\) in

and including them as part of the equation system.

constructs the wealth share from the budget constraint of Agent 1. 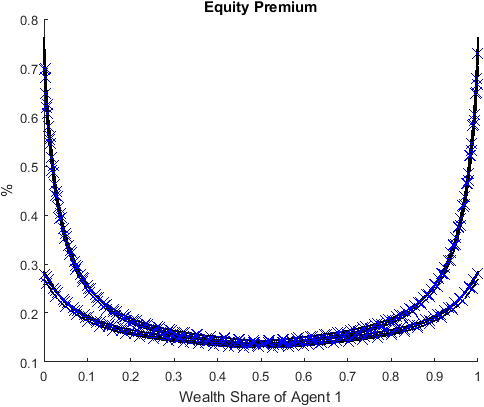 Through this simple example, you understand the power of the toolbox and all the essential ingredients to solve a modern macro model.

For the time-iteration algorithm to work robustly, a crucial step is to define the starting point of the iteration properly. A candidate that delivers good theoretical property and proves to be numerically stable is to start from a last-period problem, so the algorithm can be viewed as taking the limit of the solution from finite-horizon iterations (Duffie et al (1994); Magill and Quinzi (1994); Cao (2020)).

The last-period problem has been so far trivial in the RBC model and Heaton and Lucas (1996) examples, but could turn out to be more complex and requires to define a different system of equations than the main model; block. Also, at the boundary of the state space, the equilibrium may be characterized by a different system of equations, and such boundary conditions turn out to be necessary to solve many models robustly (for example, consumption might be exactly zero at the boundary, violating the Inada condition). To see how these issues are addressed very conveniently in the toolbox, see example Cao and Nie (2017).

Or you can directly proceed to the toolbox’s API.