Getting Started - A Simple RBC Model¶

The model is a canonical complete-markets Real Business Cycle (RBC) model with a single productivity shock. This simple model can be approximated with linear solutions well, so using GDSGE to obatin global non-linear solutions is not necessary. Nevertheless it serves as a good starting point to illustrate the basic usage of the toolbox, as this model should be familiar to any macroeconomic audience.

where parameter \(\beta>0\) is the discount factor, \(\sigma>0\) is the coefficient of relative risk aversion. \(c_t\) is the consumption. \(\mathbb{E}\) is an expectation operator integrating the productivity shock to be introduced below.

Competitive representative firms produce a single output according to

Capital depreciates at rate \(\delta \in (0,1)\). Investment technology can convert one unit of output to new capital:

The complete-markets equilibrium can be characterized by the Euler equation and the goods market clearing condition:

Given \(K_0\), a sequential competitive equilibrium is stochastic processes \((c_t,K_{t+1})\) that satisfy system (1). To input the system into GDSGE, we need to write the system in a recursive form.

The recursive system can be solved using a time iteration procedure:

The recursive system can now be input to GDSGE via a mod file rbc.gmod below.

The gmod file can be uploaded to the online compiler at http://www.gdsge.com/ (Remember also to download the necessary runtime files following the instruction on the compiler website). The compiler returns three files that can be used to solve and simulate the model: iter_rbc.m, simulate_rbc.m, mex_rbc.mexw64.

First, call iter_rbc.m in matlab to run the policy iterations and store the returned result in IterRslt, which produces

where Metric is the maximum absolute distance of var_interp between the current and the last iteration, and maxF is the maximum absolute equation residual across all collocation points in the current iteration. As shown, the converged criterion by default is Metric smaller than \(1e-6\), and can be overwritten by the option TolEq that can be put into the gmod file or supplied in an option structure when calling iter_rbc (see details below).

The returned IterRslt contains the converged policy and state transition functions. For example, we can plot the policy function for consumption \(c\): 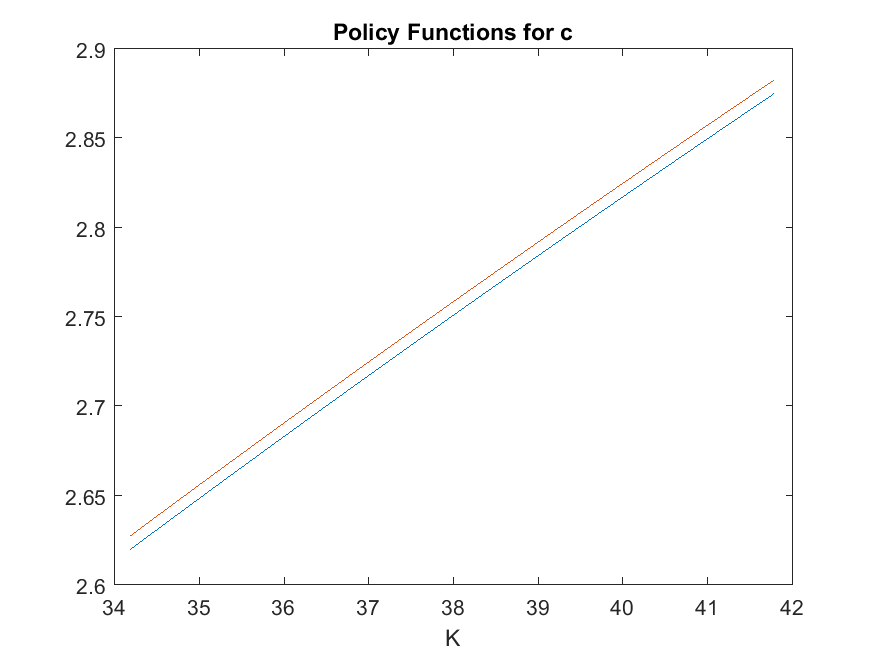 We can now simulate the model by inputting IterRslt into simulate_rbc:

The returned SimuRslt contains a panel of simulated paths with num_samples and num_periods specified in the mod file. For example, we can plot the histogram of state variable \(K\): 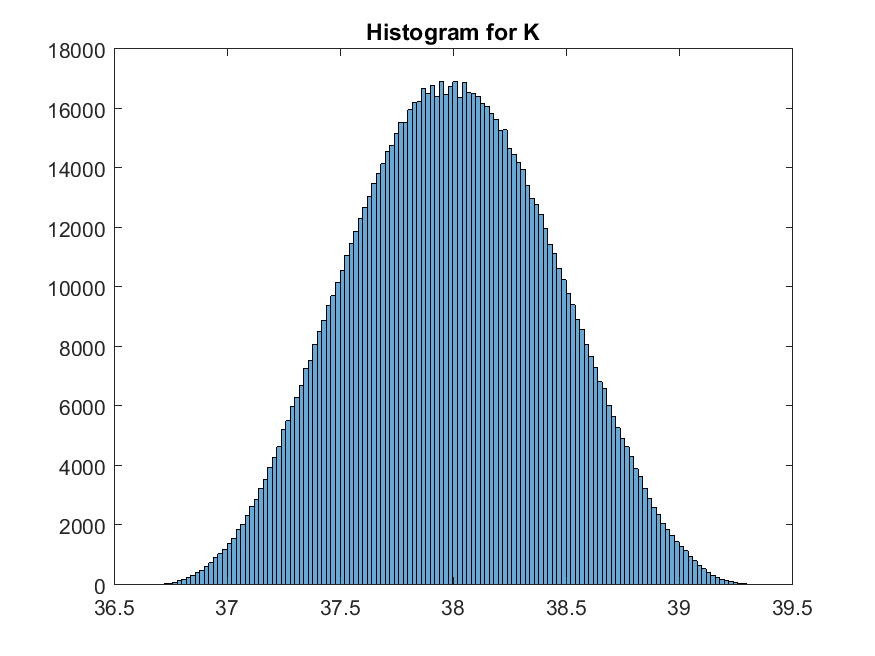 Or we can plot the first two sample paths of wages for the first 100 periods: 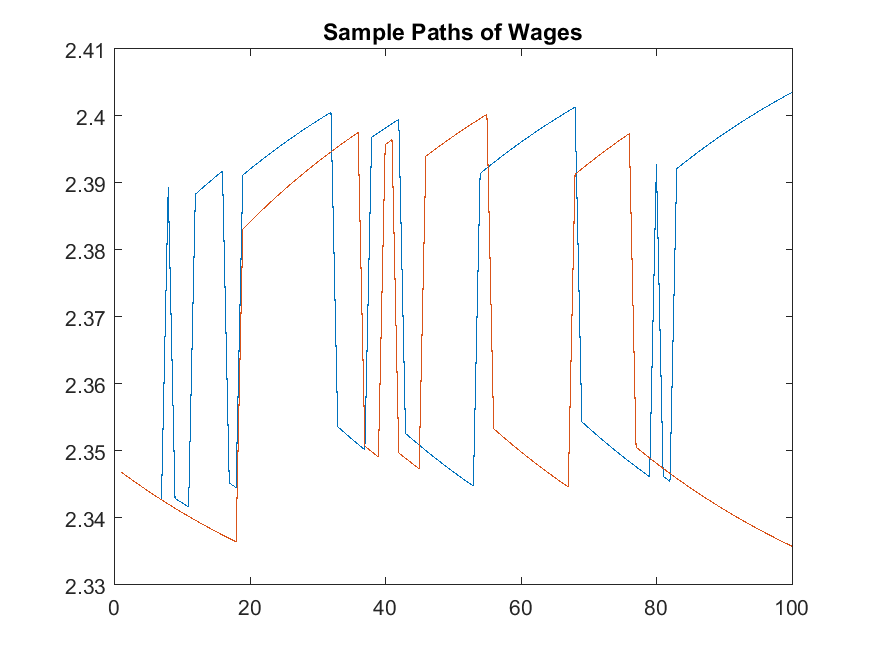 The iter and simulate files can be reused by passing parameters to be overwritten in a struct. For example,

Part of the toolbox options can also be overwritten by including them in the struct. See Options.

We now look into each line of rbc.gmod and describe the usage.

A line starting with keyword parameters declares parameters. Parameters are variables used in the model block that are invariant across states or over time. Matlab-style inline comments can be used following a “%”.

For multi-dimension exogenous states, shock_num needs to be specified as the number of discretze points in the Cartesian set across all dimensions. shock_trans should be specified as the full transition matrix accordingly. Matlab functions ndgrid and kron can be used to construct the Cartesian set and the full transition matrix.

If an exogenous state follows a continuous process such as AR(1), specify the state to be an endogenous state instead in var_state, and discretize the innovation.

Endogenous states such as capital in the RBC model should be declared following keyword var_state. Then the discretized grid for each state should be specified (e.g., K = linspace(KMin,KMax,KPts); in the example). Notice that any Matlab expressions (such as function linspace here) can be evaluated.

The discretized grid will be used in fixed-grid function approximation procedures such as splines and linear interpolations. For adaptive grid methods, only the range of the grid will be used.

The time iteration procedure requires taking the state transition functions (here, implicitly defined in \(c_{t+1}(z,K)\)) as given when evaluating the system of equations. These state transition functions are declared following keyword var_interp. They are named var_interp since they are usually evaluated with some function approximation procedure such as interpolation in evaluating the system of equations.

Each of the transition functions needs to be initialized following keyword initial. Here \(c_{t+1}(z,K)\) is initialized as \(zK^{\alpha} + (1-\delta)K\) which means that consumers just consumer all resources that include output and non-depreciated capital. This initialization basically requests the toolbox to find the equilibrium that corresponds to the limit of a finite-horizon economy taking the number of horizons to infinity, of which \(c_{t+1}\) is initialized to be the last-period solution. Notice that the Matlab “dot” operator (.*) works in the line following initial, and relevant tensors are formed automatically.

In general, it is crucial to form a good initial guess on the transition functions to make the policy iteration method work. Starting with a last-period problem is shown to deliver both good theoretical properties and robust numerical computations (Cao, 2018). See Mendoza (2010) for an example on how to define a more complex last-period problem that may require solving a different system of equations, through a model_init block.

All policy variables that enter the equations as unknowns are declared following keyword var_policy. For each of these variables, the bounds for where the equation solver searches the solution should be specified following keyword inbound. For variables of which the bounds cannot be determined ex-ante, specify tight bounds for them and use an adaptive option so the solver adjusts bounds automatically when it cannot find solutions and adapt bounds across time iterations. See var_policy in Variable declaration.

A variable followed by a prime (‘) indicates that the variable is a vector of length shock_num. For example,

Any var_interp declared before can be used as a function in the model block. For example,

means calculating \(c_{t+1}\) based on the state transition function implied by c_interp, at the next-period endogenous state K_next (which is a current policy variable). Where are the next-period exogenous states? These are taken care of by the prime (‘) operator following c_interp, which means that it is evaluating at each realization of the future exogenous states, and returning a vector of length shock_num. Accordingly, the left hand side variable should be declared as a vector, i.e., a variable followed by a prime (‘).

The model block can use several built-in functions for reduction operations. For example, the GDSGE_EXPECT{} used in

is to calculate the conditional expectation of the object defined inside the curly braces, conditional on the current exogenous state, using the default Markov transition matrix shock_trans. Obviously, this function is meaningful only if it takes as argument the realizations of variables across future exogenous states, which are defined as vector variables followed by prime (‘).

This operator can also take a different transition matrix than shock_trans, which is used as GDSGE_EXPECT{*|alternative_shock_trans}. This can be used to solve models with heterogeneous beliefs. See example Cao (2018).

Two other reduction operations GDSGE_MAX{} and GDSGE_MIN{} are defined, which are to take the maximum and the minimum of objects inside the curly braces, respectively. See Built-in functions.

The simulate block defines how the file for Monte Carlo simulations should be generated. It should define the initial endogenous state following keyword initial. initial K Kss; in the example sets the endogenous state \(K\) to Kss defined before.

The simulate block should define the initial exogenous state index following keyword initial shock. It should define the variables to be recorded following var_simu. It should define the transition for each state variable. In the example, K'=K_next; defines that the next period endogenous state \(K\) should be assigned to K_next which is one of the var_policy solved as part of the system. Notice the prime operator (‘) following K indicates that the line is to specify the transition of an endogenous state variable in the simulation, which has a different meaning than the prime operator (‘) used in the model block. Nevertheless, the prime operators (‘) in both usages are associated with the transition to the future state, and thus motivate such designs.

The current example demonstrates the basic usage of the toolbox. You can proceed to an extension with investment irreversibility that requires a global method, or to a real example Heaton and Lucas (1996) which is the leading example in the toolbox paper.

Or you can proceed to Toolbox API.