The model studies the creation of safe assets (risk-free bonds) between two agents with different risk aversion levels, in an endowment economy with rare disaster shocks. The model serves as an example to demonstrate how the toolbox can accommodate general recursive preferences such as Epstein and Zin (1989) - Weil (1990), which is a common preference specification in the asset pricing and macro finance literature. The example also demonstrates that the solution method can handle ill-behaved equilibrium systems robustly: in the context of Barro et al. (2017), when the risk aversion level is set very high (e.g., with coefficient of relative risk aversion up to 100), the traditional nested fixed point solution method becomes unstable, since agents’ portfolio choice becomes very sensitive to the pricing function. Nevertheless, the toolbox, which solves the equilibrium as one single system of equations, can handle such parameterization fairly easily and uncovers novel theoretical results.

There are two groups of agents, \(i=1,2\) in the economy. Agents have an Epstein and Zin (1989) - Weil (1990) utility function. The coefficients of risk aversion satisfy \(\gamma_{2}\geq\gamma_{1}>0\), i.e., agent 1 is less risk-averse than agent 2. The other parameters between these two groups are the same. There is a replacement rate \(\upsilon\) at which each type of agents move to a state that has a chance of \(\mu_{i}\) of switching into type \(i\). Taking the potential type shifting into consideration, their utility function can be written as

Denote the beginning-of-period wealth of agent \(i\) by \(A_{it}\). Each agent’s budget constraint is

Considering the type shifting shock, the law of motion of \(A_{it}\) is

is the average return of agent \(i\)’s portfolio, and

is the equity share of agent \(i\)’s portfolio holding. The FOCs for consumption and portfolio choices are

In equilibrium, prices are determined such that markets clear:

We see that given the market clearing conditions (6) and (7),

For much of the analysis in Barro et al. (2017), the intertemporal elasticity of substitution \(\theta\) is set at \(1\). In this case, agents consume a constant share of their wealth, and equation (3) is replaced by

The utility function (2) is replaced by

The model is solved with the following safe_assets.gmod file

There is not too much new about the usage of the toolbox if you already saw examples Heaton and Lucas (1996) and Guvenen (2009). There are some transformations worth mentioning which facilitate solving the model.

These lines describe how to calculate the Euler Equation residual

when the CRRA coefficient \(\gamma_2\) is very large: by tracking and calculating the log level of utility instead of the level of utility. This procedure proves to be essential in solving models with \(\gamma_2\) very high, as \(u\) can easily fall below the smallest number permitted by double precision.

As in previous examples, we can inspect the policy functions and ergodic sets after solving policy iterations and simulations. Here, we focus on how to construct generalized impulse responses using the model simulations. Since the equilibrium concept involves an ergodic distribution of state, instead of a deterministic steady state, the proper concepts of impulse responses are sampling responses from the ergodic set, and taking their averages and standard deviations. The sampling procedure can be done on a sub-population of the ergodic set, generating conditional impulse responses which will be of particular interests since the non-linear models may feature different dynamics starting from different part of the state space.

The procedure for constructing generalized impulse responses goes as follows:

1. Simulate an ergodic set, which can be done by simulating one or multiple samples for a long-period of time, according to the Ergodic theorem.

2. Replicate the ergodic set to get two identical sets. For one of the two, turn the shock to “on”. The exact procedure depends on the model. In the current example, “on” corresponds to the rare diaster state. For the other set, keep the shock unchanged.

3. Simulate the two sets, keeping the transitions of the exogenous shocks on. This procedure essentially captures the effect of the switching of the shock in the initial period on subsequent dynamics.

4. Calculate the mean and standard deviation of the differences between simulated time series of the two sets. These arrive at the mean impulse responses and the standard deviations. Again, the above procedure can be conditional on a sub-population of the ergodic set so as to compute conditional impulse responses starting from states with certain properties of interests. 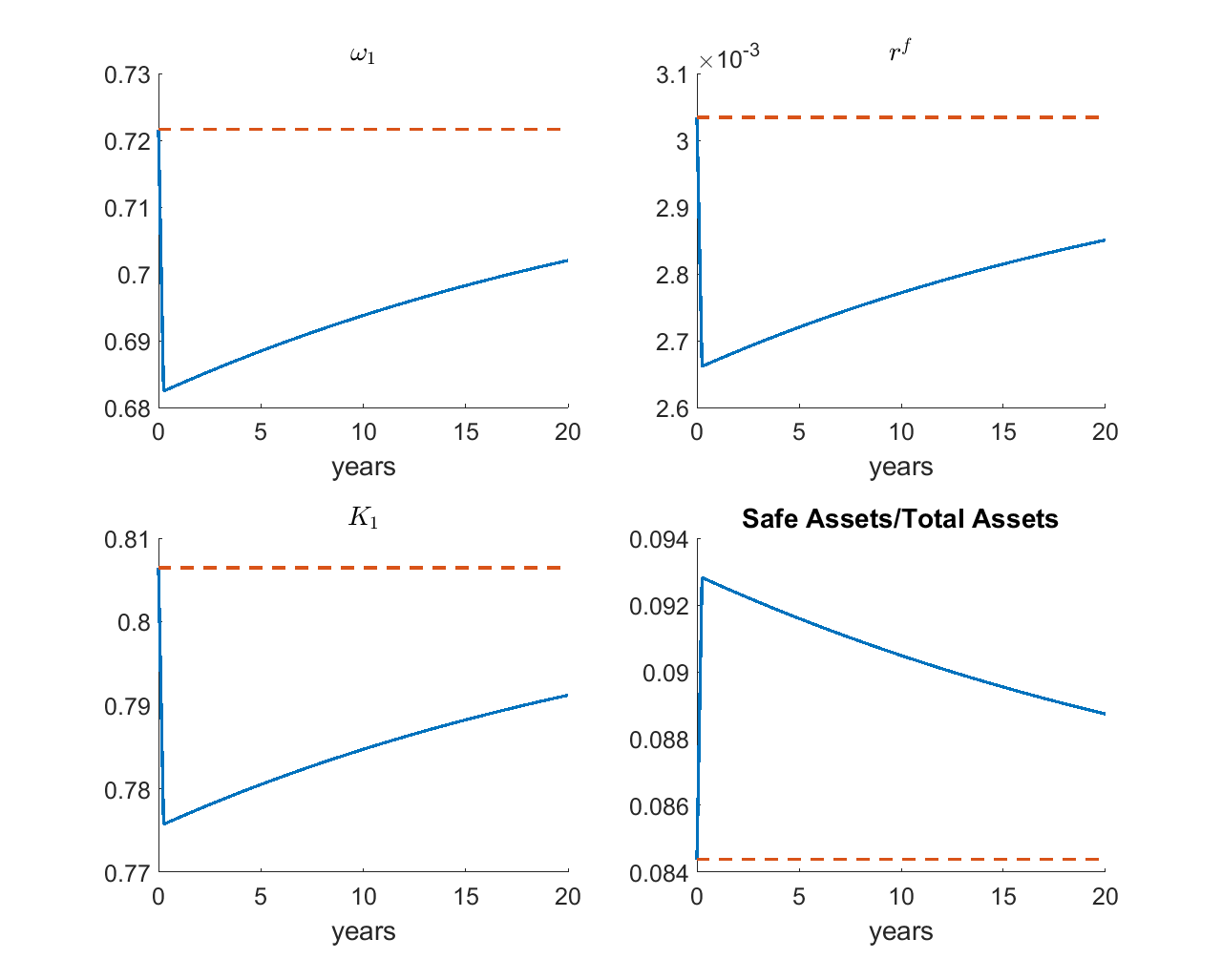 A final remark is on the price of safe assets, which exhibits non-monotonicity as the risk aversion of Agent 2 \(\gamma_2\) increases, as shown in the figure below. This non-monotonicity is usually overlooked in the literature and uncovered by our solution method that can solve models with high \(\gamma_2\) robustly and accurately. 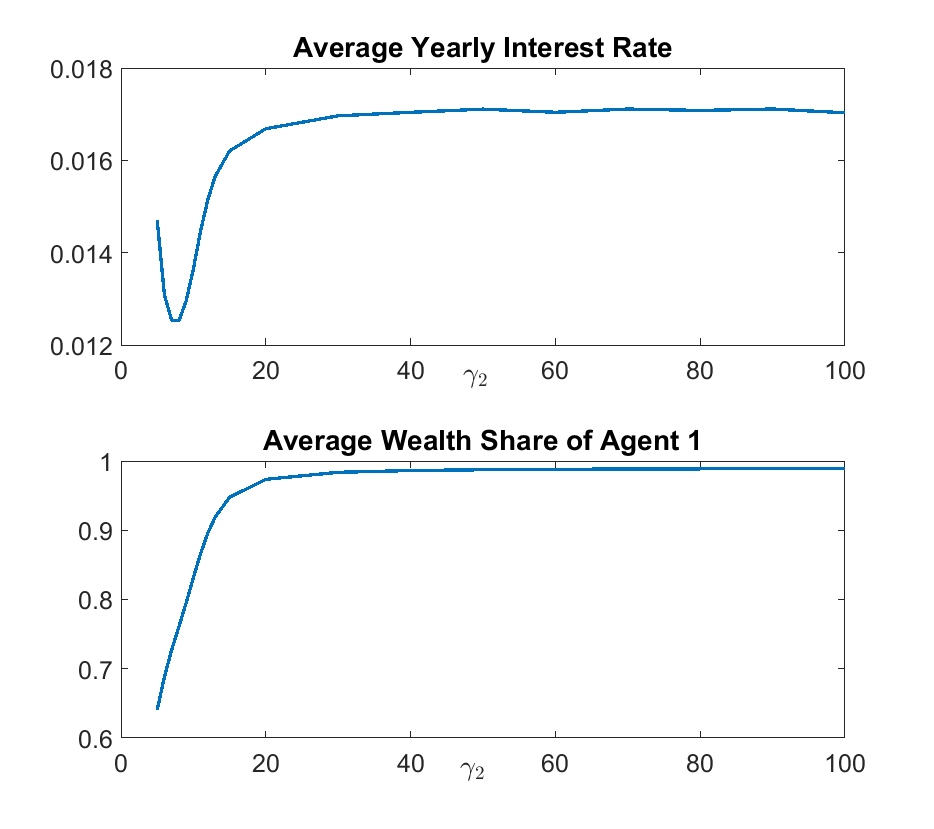 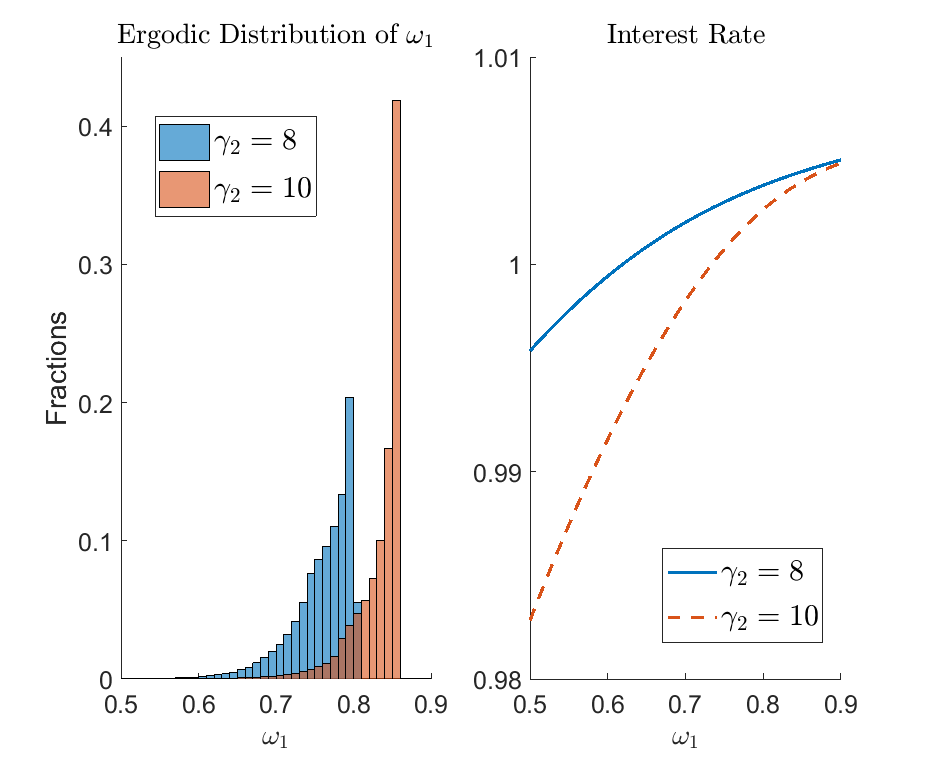 This example illustrates that the toolbox algorithm is especially effective to solve models where portfolio choices are sensitive to the asset price, which are traditionally considered ill-behaved problems. In Cao, Evans, and Luo (2020), we solve another model which is traditionally considered ill-behaved: a two-country DSGE model with portfolio choices in which the returns to assets are close to collinear in certain regions of the state space.

Or you can directly proceed to Toolbox API.